People would be foolish to just wake up one day and decide to decimate 6 million people. Ideas are powerful, because ideas turn into acceptance and acceptance turns into actions, actions become behavior and behavior changes into a cultural norm in the long run.


Ideas, moreover, are only powerful because people buy into them. This is why the scene at the grocery store with Koreans is important. The scene portrays the power of ideas and its ability to change people. Moreover, the speech of Derek at the store presents surprising parallelisms with the ideas that people bought into during the Nazi movement.

The illegal immigrants that work in America creates the joblessness of the Whites. In the same way, the Nazis of Germany argued that the Jewish refugees from a devastated nation came to Germany carrying nothing but they thrived there—owning businesses, banks, etc—and became powerful while a bulk of the German population are poor and unemployed.

The grocery store scene shows just how potent a dangerous idea is. People want to follow a passionate leader. Racism became accepted because people tolerate the act and follow the dangerous norm. Similarly, people with strong moral convictions are also heard. The scene of Dr. Sweeney and Danny is significant because it shows how racism can be challenged, not through hostility, but with reason. Dialogue fosters understanding, or at least, it presents a different way of looking at things. The anti-racism movement is laden with Sweeney types of people such as Luther King Jr.

Sweeney is the personification of the challenge against the neo-Nazist trend. 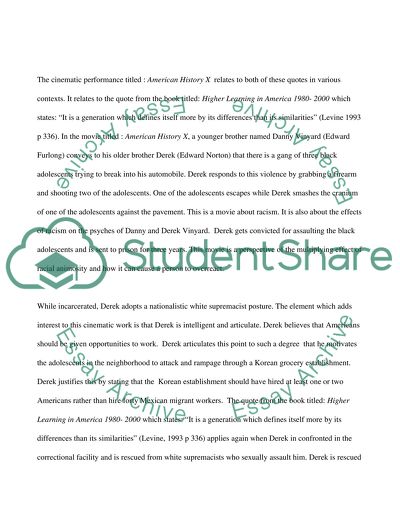 His moral courage and convictions made people think and listen. Another important scene in the film is the presentation of Derek and his change of heart. This took place in prison, where racism is also a strong force that binds and separates inmates. In prison, Derek is still resolved in his racist convictions and he bonded with fellow racists, until he was befriended by a Black guy. His previous stereotypes regarding Blacks was challenged by the good-natured behavior of the black guy. It is essentially a realization that people of different colors are still people sharing a common humanity.

When fellow racist inmates raped Derek for befriending a Black guy, he came to understand that goodness and evil are not just seen by the color of the skin. There is blackness of the heart even in the whitest of white, and a whiteness of the soul in the pitch black-colored person.

Every act of kindness and every act of violence has its ripple effects beyond what a person can control. Now Danny took the same convictions as Derek by being adamantly intolerant of minorities.

The small anti-Black movement that Derek started became a great massive force, and now that he had a deeper realization of the evil of racism, he sees that he is responsible for this. Undoing things are more difficult that doing them, especially when we do things mindlessly such as when we resort to hatred and violence.

It is easy to sow seeds of violence because it spreads like wildfire, but sowing peace is like planting a seed that needs to be nurtured. Danny also had his turning point. His brother made him realize that racism is a useless thing. He understood that violence will only be met with violence. Racism is phenomenal because not many people analyze and interpret before acting on something.

enter Later we learn it wasn't just his father's death that shaped him, but his father's dinner table conversation; his father tutors him in racism, but the scene feels like tacked-on motivation, and the movie never convincingly charts Derek's path to race hatred. The scariest and most convincing scenes are the ones in which we see the skinheads bonding. They're led by Derek's brilliant speechmaking and fueled by drugs, beer, tattoos, heavy metal and the need all insecure people feel to belong to a movement greater than themselves.

It is assumed in their world the beaches and playgrounds of the Venice area of L. Indeed the race hatred of the skinheads is mirrored with different words and haircuts by the other local ethnic groups. Hostile tribalism is an epidemic here. The film, written by David McKenna and directed by Tony Kaye , uses black and white to show the recent past, and color to show the hour period after Derek is released from prison. In prison, we learn, Derek underwent a slow transition from a white zealot to a loner--a brutal rape helped speed the process.


Meanwhile, young Danny and his friends including a massive guy named Seth, played by Ethan Suplee wreck a grocery run by immigrants. At school, Danny is a good student, as Derek was before him; both are taught by a black history teacher named Sweeney Avery Brooks , who supplies the moral center of the film. I kept hoping it would be more--that it would lift off and fly, as it might have with a director like Oliver Stone , Martin Scorsese or Spike Lee. But it never quite does. Its underlying structure is too apparent, and there are scenes where we sense the movie hurrying to touch its bases.


With a swastika tattooed on his chest, he fits in at first with the white power faction, but is disillusioned to find that all the major groups in prison black, Hispanics, white have a working agreement; that's too much cooperation for him. Fine, but is it that, or a crucial basketball game, that gets him into trouble?

Not clear. He's assigned to the laundry, where his black co-worker Guy Torry , in a wonderful performance gradually--well, begins to seem human to him. But there's a strange imbalance in the conversion process. The movie's right-wing ideas are clearly articulated by Derek in forceful rhetoric, but are never answered except in weak liberal mumbles by a Jewish teacher played by Elliott Gould , among others.